What's So Exciting About Sime~Gen?

What is it about these stories that span so many genres that makes the characters walk off the pages of the book and into the readers' dreams? 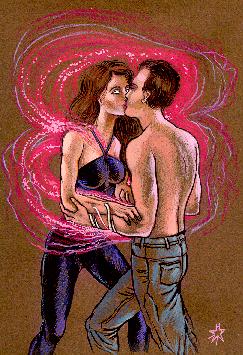 Two people embrace, arms intertwined, hands grasp arms, lips touch - and then life flows from one to the other.

An instant later, one falls dead, all of the stuff of life drained from her young, formerly vibrant body.

For one to live the other must die.  That is the way it always has been since the collapse of Ancient Civilization when humanity mutated into Sime and Gen.

Then, after a thousand years of the Kill, the First Channel discovers he doesn't have to Kill to live and the world changes.  Some Simes no longer Kill Gens to live -- and some Gens discover they enjoy Giving Life.

The need for life and the need to give life: two sides of the same coin. That is what it means to be Channel or Companion in the Sime~Gen Universe.

Would you have the courage to give of your self so that others may live?

Could you face the danger of being Killed - just so another might live one more month?

If you were Gen, could you serve the Need of a Channel so that he or she could "channel" life from Gens who are too afraid to give to the Simes who can not control the urge to Kill?  Could you face death every month to save Humanity from Zelerod's Doom - from Extinction of the entire human race?  Could you be a Companion?

Or if you were a Channel - could you surrender to the mercy of a Companion - a Gen - every month?  Could you trust that much?  Could you expose your extreme empathic sensitivities, designed by nature to let you hunt Gens, to the extra-powerful aura of a Gen trained to know how to Kill you?  Would you dare try - so that you could go on preventing other Simes from the Kill?

Perhaps as an Ancient, you might very easily say yes to either question.

But if you lived in the Sime~Gen Universe, you would have grown up not knowing if you would become Sime or Gen.  In some families, in some places, Simes are hated and feared (for good reason).  And in other places, Gens are regarded as animals, nothing more than food to satisfy killust.

If at puberty you turned into the wrong sort of adult -- could you find the psychological strength to survive as an honorable person?

If you were born and raised in a Gen Territory and turned into a Sime at puberty -- and if your own parents didn't shoot you dead on the spot because of the sudden danger you posed to them and all Gens -- and if your very best friend, your passionate young lover, turned into a Gen -- your next touch, your next kiss must of necessity be the last you would ever share with her.

Your only way out of that horror is to run -- to race for the border into another Territory - a Sime Territory - where your kind might find refuge.

In a certain time, in one particular place, that refuge would be the House of Zeor where you could find a Channel to serve your Need.  But hurry, in less then one month your Need  will over-power your love.  If that happens to you - then the end of your Gen lover's life is only is only a kiss away.

The Channel, a Sime who can take some of the selyn - the energy that is life itself - from your bride and give it to you lives in a Householding where Simes and Gens live and work together.  The Householders live not as predator and prey but as a community, hoping one day that never again will young lovers fear each others' touch.  In the Householding, the special Simes called Channels take selyn from all the Gens, slowly, gently and without harming the Gen, and give it to the Simes who can not restrain their Need if they should ever touch a Gen directly.  Thus satisfied, those Simes never Kill.

But those Householdings -- in a certain time and many places -- are regarded by the surrounding Sime communities as perverts, disgusting deviants whose practice of not-Killing is reason for pogroms against the isolated and vulnerable fort-like Householdings.

You are not safe, even in a Householding.

If you were born and raised in a Householding -- if you had the love of your parents regardless of whether you turned out Sime or Gen at puberty - would you have the courage to act to change that world?  What could you do to make Simes stop killing?  To make them respect those who refrained from the Kill at great personal cost?

If you were born and raised in a Sime Territory and at puberty turned into a Gen adult -- your very own parents would sell you to the Pens -- where they breed Gens for the Kill.

The Sime~Gen Universe stories span several thousand years of human history from the First Channel's discovery that he doesn't have to Kill to Live (a thousand years after the downfall of Ancient Civilization due to the mutation) -- all the way into an age of space travel, and a Galaxy spanning civilization of Sime and Gen living in peace and harmony with other -- non-differentiated -- species in the Galaxy.

Between those two points in Sime~Gen History -- thousands of years apart -- there are millions of ordinary human beings caught up in the rigors, conflicts, plights, torments, desires and passions of life as Sime, Gen, Channel, or Companion -- and many new alternate lifestyles.

Wherever you live in this Sime~Gen panorama of Future History, you can not escape being ignited by passion, seared by the fires of Need, challenged by affairs of Honor, or facing immanent death for your lack of compassion.

Do you have what it takes to survive in such a Universe?   That is the question that brings readers back for more, and yet more, unable to rest until they've acquired all the books and read all the stories posted online.   That is the question that flashes through their dreams, and emerges as a creative force within this fandom.  Because once hooked on this Universe, readers can't stop until they've found their own place within its framework  -- or created themselves a new place.

[an error occurred while processing this directive]

Find out why we so vigorously support amazon.com

Feedback about this page.

Feedback about technical problems with this site.

Concerned about your privacy? Simegen Inc. respects your rights, and the protection of children. Please read our Privacy Statement.

|Learn About Keon's Chain of Freedom