From newer to older

Coal for Christmas by Lois June Wickstrom and Jean Lorrah won the 2012 Gold Remi in the Family Screenplay category. We were there for the award ceremony in Houston, at a fabulous banquet.

WorldFest, at 45, is the oldest independent film festival in the world, and the 3rd-oldest international film festival in North America. While most of the awards are given for completed films, there are also several categories for screenplays.

We are in excellent company. Stephen Spielberg and George Lucas won Gold Remis when they were starting out, and Ridley Scott won one for a screenplay, just like us. Our next (very hard) job is to parlay being able to attach "award winning" to our script into actually getting it made into a film!

All the previously published Sime~Gen books are back in print, and there are FOUR NEW ONES available that have never been published before!

The very latest book, debuting in April 2012, is The Farris Channel by Jacqueline Lichtenberg, the story of the founding of the House of Zeor. This is the book fans have wanted for years, so much that the Founding 400 pledged to each buy a hardcover copy if it ever got published. Here's your chance!

The new books are available as ebooks and as trade paperbacks. If you prefer Kindle format, use the links below. If you prefer a different ebook format, go to your favorite ebook store and search on title and author.

The Farris Channel by Jacqueline Lichtenberg

In this short novel, students at Rialite--school for the brightest and best young simes and Gens--court big trouble when they become obsessed with role-playing on the school's newly-reinvented mainframe computer. Click on the graphic to purchase the Kindle version.

The Story Untold and Other Stories by Jean Lorrah:

These stories track the fifteen-year career of Zhag Paget and Tonyo Logan, the musicians who wrote the soundtrack for Unity and lived to become the first inter-territorial superstars. Click on the graphic to purchase the Kindle version.

While the two short books above can be purchased separately as ebooks, if you want them in paperback they come together in an "Ace Double" format:

To Kiss or to Kill by Jean Lorrah:

This full-length novel is something the fans asked for: a story of ordinary people who are not Farrises or Tigues, not Householders, not channels, not capital-d Donors. It is the tale of that vast majority of people whose heroism and sacrifice made possible the Unity of sime and Gen, living day to day the treaty made at the end of Zelerod's Doom. At the center of the turmoil is a story of love that truly does have to conquer all. To purchase the Kindle version click on the graphic above, or to purchase the paperback click here: To Kiss or to Kill (Sime~Gen, Book 11) (Volume 11)

Did you miss any of the first eight Sime~Gen novels? Or lose your copies? Or would you like them for your Kindle? Here they all are, all in print at once for the very first time! You won't find them in stores, but you can get them from amazon.com.

To read my most recent articles on writing, click here: "View My Articles"

A collection of Jean Lorrah's short stories is now available under the Borgo Press imprint. It is part of a huge project by Amazon.com and Booksurge to bring thousands of beloved books back into print. Find it at Amazon.com.

All seven Savage Empire novels will be reprinted in 2011-13 under the Borgo Press imprint. They will be part of the Borgo Press/Amazon.com/Booksurge project mentioned above.

Meanwhile, the second volume of the reissue of Jean Lorrah and Winston Howlett's Savage Empire books from BenBella is still available. SAVAGE EMPIRE: PROPHECIES contains the fourth and fifth volumes of the series, the ongoing history of what happens after Lenardo, the Master Reader (telepath) becomes a Lord Adept of the Savage Empire.

On March 26-27, 2010 I was invited to teach a writing workshop at Central High School in Knoxville, Tennessee. Erin Atchley is the teacher of the group of students pursuing creative writing in science fiction and fantasy.

I was impressed. The ideas students have are genuinely original, and they are writing about fascinating, well-developed characters. Their weaknesses are typical of novice writers: they need to learn how to structure their plots. In other words, they have the raw talent, and just need to hone their craft. I think in a few years we are going to see best-sellers coming from some of these young writers.

Some of you know that I have been working for some time on moving from book writing to screenwriting. Go here to read an essay about why I became a writer in the first place, and why I am trying to change media now.

My cat, Earl Gray Dudley, Th.C., (called "Dudley") is a certified therapy pet. We do pet therapy with the Calloway County Humane Society. While we visit nursing homes and the long-term care unit at the hospital on a regular schedule, an increasingly popular project is to bring the therapy pets to the Murray State University campus, for students who have had to leave their own pets at home. Click here to see Dudley with one of the students on a recent visit.

Jean has an article, "Love Saves the World," in Seven Seasons of Buffy, a collection of essays on Buffy the Vampire Slayer by science fiction and fantasy authors, from BenBella Books. Order here.

Her article, "A World Without Love," is in Five Seasons of Angel, a companion volume to the Buffy collection, from BenBella Books. Pre-order here. 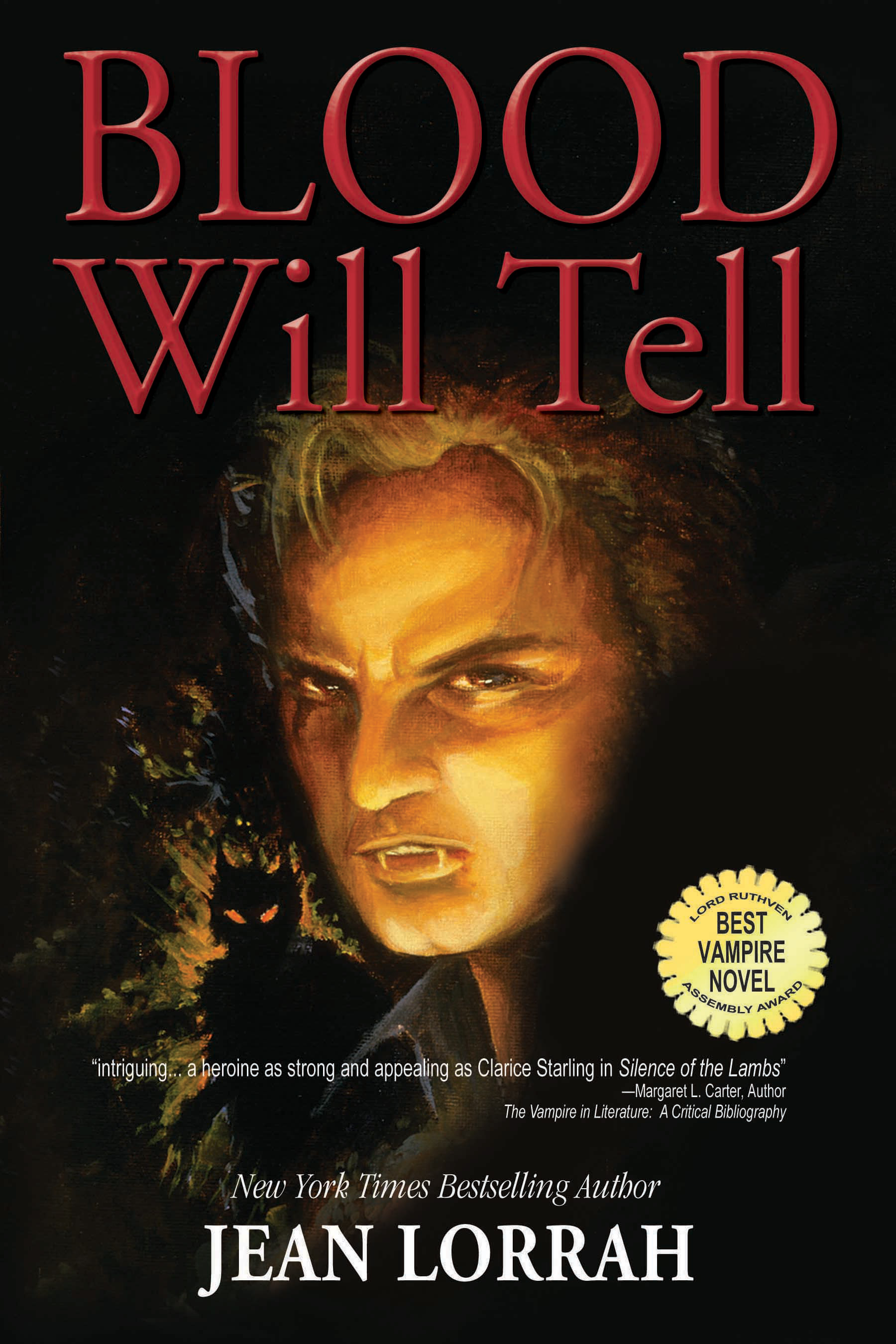 Blood Will Tell is out of print but not out of stock from BenBella Books. You can still order it here. This book has also been reprinted as part of the Wildside/Borgo Press/Amazon.com/Booksurge project mentioned above.

December, 2002, Blood Will Tell wins Best Paranormal in the LORRIE contest sponsored by From the Heart chapter of Romance Writers of America.

There were over 150 vampire novels published in 2001, so being named the best is truly an honor.

The Lord Ruthven Assembly is the group of scholars of vampire literature and lore who meet every year in association with the International Conference on the Fantastic.

To keep up to date on Jean Lorrah's latest publication news, subscribe to the Lifeforce Newsletter. You will not be inundated with email. Issues are sent four or five times each year, when there is actual news.

Blood Will Tell mixes mystery, police procedural, romance, and dark fantasy. For more information about this novel, see Jean's Kiss of Death, Kiss of Life website. Blood Will Tell is available as an e-book from Awe-Struck E-books. It is currently available for download in HTML for the standard computer, Rocket reader for the Rocket eBook reader device, PRC DOC files for the Palm Pilot device, MS Reader for the PC and Pocket PC, FUB for eBookMan, Mobipocket for Palm Pilot, Pocket PC, eBookMan, and KML for hiebook. You can also order it from Barnes and Noble.

Watch the video, listen to the sound bite, or read the transcript from the McNeil News Hour, April 30, 2001. (It's all available here.)

Nessie and the Living Stone by Lois June Wickstrom and Jean Lorrah was named best children's book at the Independent E-book Awards on Saturday, March 24, 2001. Lois was on hand to receive the award, which was presented in conjunction with the University of Virginia Festival of the Book.

Judges for the Award included editors from Publishers Weekly, Foreword Magazine, Random House, and Writer's Digest, several best-selling authors, and the founder of the New York Review of Books.

Click here to read the reviews of Nessie and the Living Stone.

Nessie and the Living Stone has been available since 2000 as an e-book for direct download or on CD-ROM. Now for those of you who want a traditional paper book that you can read anywhere, it is available as a trade paperback from Amazon.com. It has been the #1 best-selling children's book on Fictionwise time and time again for the past six years, and is perpetually in the top five.

Nessie and the Viking Gold

By Lois Wickstrom and Jean Lorrah. The sequel to Nessie and the Living Stone, is also available on Amazon.com.

The third book in the series, Nessie and the Celtic Maze is available as an ebook from Fictionwise.

All three of these award-winning children's books will also become available in 2007 as part of the Borgo Press/Amazon.com/Booksurge project mentioned above.

For older works that are currently available, click here.

Three of my four Star Trek novels are now available for download as electronic books. Find The Vulcan Academy Murders, The I.D.I.C. Epidemic, and Survivors at Amazon.com.

This is Pocket Books' Star Trek: The Next Generation novel #4. For all you fans in the Czech Republic, there is now an edition in your language from Laser publishers.

Jungian interpretation of these two well-known characters, to be published in the 2000 volume of the conference proceedings of the International Association for the Fantastic in the Arts.


This page created with